I just noticed that there’s a lot of queries about John Gruber an Paul Thurrott here. Then again, out of all the people who took their time reading what I posted, only 2 commented so far. 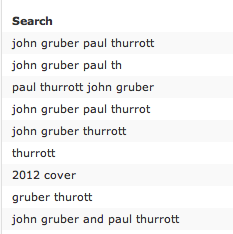 Well, at least one person is interested in the cover art for 2012 movie.

I would like to produce a video of an open debate between John Gruber and Paul Thurrott. I don’t have the budget to fly them to Los Angeles, but I’d do Skype with both of them to let them have at it.

John and Paul, how about it? It’s going to be a good and informative entertainment.

Leo, you know both Gruber and Thurrott, but I claim this idea for having both of them squaring off on video. If you want to produce it, let me know.

This site uses Akismet to reduce spam. Learn how your comment data is processed.